My Past Month Recapped

It’s been a week or two since I last updated, and even longer since I have been home in Mtongwe, but I am back at the Peace Corps office in Nairobi with not much to do, so I thought I would do my travel recap while I have the free (but still slow) internet.  I might even throw in some pics if the connection lets me.

So my first week was spent working with the WCE and KSPS volunteers, as you already know, setting up computer labs all around the Nyeri District and prepping them to receive internet connections in the hopefully near future.  It was a good time and I believe I have chatted about it enough so I will leave you with some pictures:

After that it was off to the Yatta Campus of the National Youth Service where I helped a fellow volunteer, David, with some technical issues in his computer lab.  David is basically doing the same job I do but at a different campus of NYS.  It’s always fun to visit fellow volunteer sites, though I didn’t take any pictures, sorry 😦  We got a lot done, but as with everything in peace corps, there just wasn’t enough time and always more to do.  But with some work accomplished we headed off to Nairobi…

…where we got to see the new group be sworn in as official volunteers.  We now have 24 new Public Health volunteers doing all sorts of good stuff around the country.  It’s sad that a lot of them got placed out in Nyanza Province (near Lake Victoria), but we got a healthy crop of newbs on the coast as well.  I’m laying on all the newbie speak partly because I am happy to no longer be considered one!
Then it was off for a couple days helping out my friend Gavin up in his town of Nanyuki a few days before even more volunteers got there for a Permaculture workshop.  Gavin, Paula and I helped the Nanyuki River Water Users Association clean up a section of the Nanyuki River, which is heavily tapped and polluted and thus a mere trickle of its once glorious self.  Also got to play tourist a bit.

After a few days of hiking and recouping from two weeks of work and travel, the third major event of my travels began: Permaculture Workshop hosted by the Mt. Kenya Organic Farming (MOOF, don’t ask, I don’t get the acronym…).  What is permaculture?  Well, it stands for Permanent Agriculture, and I am going to try really hard not to sound too bitter about the whole thing, but it just seems like a rebranding of good agriculture techniques.  Now I am no farmer, but some of what we learned seemed common sense, such as using compost for fertilizing, crop rotation and planting kitchen gardens to supplement your diet with healthy, easily accessible food.  We also learned some really useful facts about the nutritional benefits of a lot of local foods that can easily be added to your meal with added benefit.

Some ants on a plant at the MOOF Center

The bitterness comes because it seems like agriculture techniques that I know existed in Africa before colonialism, but seem to have been lost since then (or because of it…) and the Kenyan government hasn’t done its job disseminating the 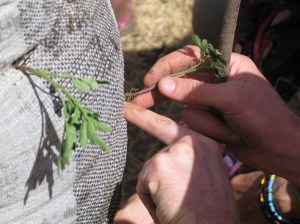 Placing some seedlings into the sack garden at the MOOF Center

information to those who need it.  This basically sums up all my grievances with the development scene here: not only are the development workers bringing in needed skills with a very small, and not-quite-yet self-sustaining culture (such as ICT), but we are also bringing in the basic skills that Kenya had, and seems to have lost 😦 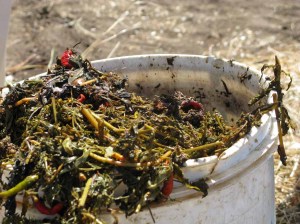 A bucket filled with green material and chemical for composting

After spending a good week in Nanyuki, it was back to the coast finally!  But not quite home.  First I had a Cross Sector Workshop to attend.  Basically, its a workshop where all the volunteers of a specific region, regardless of their sector (Education, Public Health, SEDICT), get together and share their different perspectives on a particular topic.  In this case, being a President’s Emergency Plan For AIDS Relief (PEPFAR) sponsored event, we talked about AIDS.  But we also talked about other stuff as well.  And they put us up in a nice hotel, so I can’t really complain.  I even got to swim some laps every morning, which I haven’t been able to do since leaving America.

Also got to hit up the Coast Province Trade Fair, which is like a county fair in America, farm animals and ginormous vegetables included.  But we were there the day that Kibaki, our lovely president, was in attendance, so everyone was asked to keep down the noise (and excitement, and fun, and everything else that probably would have made this a much more enjoyable experience).  I did learn an important cultural fact though: it seems that one of the favorite forms of booth-swag would be the cardboard and elastic sun visor.  I wish I had a photo.  By the end of the day I was sporting three: one for AIDS Relief, one for Grape Juice and one for Yogurt.
And now I am back in Nairobi for a medical check up instead of sitting on my couch before school starts again in a couple weeks.  My anti-malarials were making me feel a little sick, so medical wants to switch me.  I’m not going to complain.  Of course it also means I am in one of the most expensive cities in the country unexpectedly and not-budgeted-for.  Needless to say, my friend Harmony and I ate peantut butter and banana sandwiches at the hotel last night.  She’s in a similar boat as me.
And to reward all of you for reading this somewhat short post (given the time period it’s covering!), here’s a picture of a giraffe from the Nairobi Giraffe Center, taken by a friend I met one of the times I was traveling through the city this past month.  We all went to the Giraffe Center together, but I didn’t have my camera.

A Giraffe at the Giraffe Center in Nairobi

One response to “My Past Month Recapped”